RadioPoppers : How I use them


I would like to go over what RadioPoppers are as well as how and why I use them.

RadioPoppers are Radio Frequency(RF) transmitters that convert the flash signals sent from the master flash into radio signals which are then transmitted to the receivers which then convert the radio signals back to infrared signals so that the remote flashes can interpret the commands from the master flash in the same way they would using the native Nikon CLS system or Canon E-TTL. For the nikon CLS system you can look at http://www.nikoncls.com/ or any of the information from Nikon.

This is where the RadioPoppers come in. Converting the light signals to radio signals allows them to be transmitted longer distances and through walls and other objects. I have used these things several hundred yards away and inside of metal buildings without a problem. Recently I had to light the inside of a metal building so that the inside and the piece of test equipment was lit as well as the test subjects over a 200 yard area outside of the building in bright sunlight. The RadioPopper PX transmitter and receivers were able to cover the distance and the inside of a solid metal building (The rolling door was open) from 200 yards away.

With RadioPoppers I am able to put my SB-900's any place I want on location, as well as use any type of light modifier without having to worry about line of sight to the receiver window.

The question comes up " What about Pocket Wizards?" Well, they work well too. I use Pocket Wizards as a trigger for my camera. What I can't do with the Pocket Wizards is adjust the remote flashes from the master flash. There are ways to do this with the newer Pocket Wizard MultiMax triggers on specific systems.  RadioPoppers allow me to use my SB-900 flashes in iTTL or any other mode as designed by Nikon. The Pocket Wizard system requires me to go to each SB-900 and set them manually. Since I swap out cameras, flash positions and groups many times during a shoot, the ability to control everything from the master flash is essential. When used properly, using the RadioPoppers allows me to use the Nikon CLS system seamlessly as designed. Currently there is no other system that does this.

The next question is "What about studio flashes?"  Now RadioPoppers has the JrX system that works with the PX system. I have not tried these yet, but if they work anywhere near as well as the PX system, I am sure that I will love those as well.

I frequently travel light, so I carry 7 SB-900's with me in a backpack with 3 umbrellas, 3 Lastolite Triflash brackets, and 3 Manfrotto 5001b light stands. It all fits in a Tamrac Expedition 8x backpack. I also have a Lastolite Trigrip and a bunch of other cables, etc.  For me RadioPoppers provide the best solution by far.

One serious advantage of the RadioPopper PX system is the ability to use the High Speed Sync.  This allows the flashes to sync with the camera at over the usual 1/250th of a second. With High Speed Sync I can set the speed of the flash sync up to 1/8000th of a second. This allows me to absolutely freeze subjects in a well lit area. At a slower sync speed there would be trails from subject motion. More than that, I can literally turn night into day in my photos if I need to. I can set the shutter speed so high that all of the ambient light, even in bright sunlight has no effect on the photo. The flash becomes the only source of light in the photo. For this type of lighting High Speed Sync is the only option, and for the Nikon CLS system that I use RadioPoppers are the only way to do this at any distance outside of the range of the Nikon optical system.  With this setup, I have taken many photos with a 400mm lens over 200 yards away from the subject and the flashes at speeds up to 1/8000th of a second. This works well for animals in the wild and for and high speed tests that require a safe distance.

How I set up the RadioPoppers: 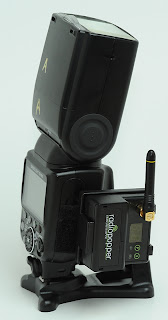 While RadioPoppers provides nice mounting brackets for the PX receiver and transmitter, I prefer to use velcro and gaffers tape to secure the receivers and rubber bands for the transmitter. This method allows me to keep my flashes conveniently packed in my old Nikon bag and pull them out ready to go at a moment's notice. I can also put them on any one of the hotshoe mounts or light modifiers that I want.

Above and to the left I show the RadioPoppers PX Receiver on an SB-900. The mount works quite well, but I prefer to use the setup below. 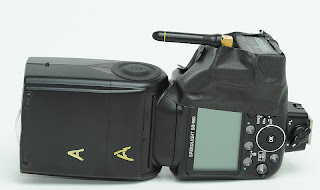 The Transmitter, as I said, I rubber band to the master flash. I leave rubber bands on my flashes almost all of the time. I use them to hold light modifiers in place. They have also saved me a cracked flash once or twice when I dropped one on the ground. (Pure luck really.) 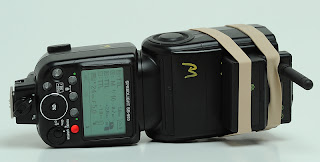 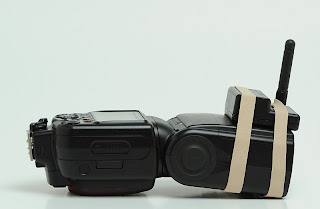 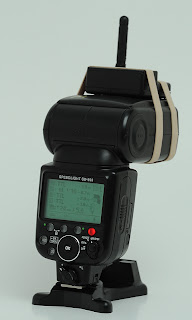 Below is a picture on my bag with 5 flashes stacked inside. They fit in there with the Radio Poppers attached and ready to go. 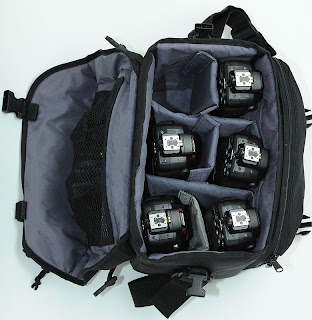 I am not sure that the people at RadioPoppers would like the way some of their stuff looks when I use it, but I am sure that no one will argue with the results. These things have saved me time and allowed me to accomplish feats that would have been impossible using any other system.

Update: I took a look at Gavin Seim's take on Radio Poppers and Pocket Wizards and I have to agree with him. It is good to keep in mind that it is not the brand, but the product that matters.  Find the product that works well for you and go with that. (Sony made great reel-to-reel tape recorders, and the walkmans and sports walkman, but their stereos were sub-par. A company may make a few good products, but that does not make every product great. Sony does have some really good engineers and lately they are a brand to look out for with innovations in the DSLR arena.)

Update: Due to continued questions on radiopoppers px versus the pocketwizard flex system here are two links:
TriCoast Photography
Pro Photo Show
Posted by Unknown at 11:25 AM

Email ThisBlogThis!Share to TwitterShare to FacebookShare to Pinterest
Labels: RadioPoppers