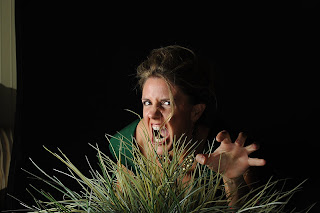 This is an original photo taken by a user of the photo booth. I even kept the left edge as it was. The tripod and background got bumped multiple times over 5 hours, but they didn't move far.. I have seen some staged and edited photos online, so I wanted to just show you the actual output.  This is one of many great shots that people took themselves. 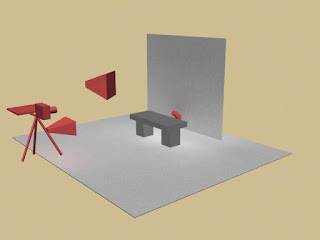 This weekend I was asked to set up a photo booth for a wedding. With the dim lighting in the bar, I found a nice corner to set it all up. The main light was a Lastolite Ezybox (softbox) 24x24 inch hotshoe softbox off to camera left. The fill light was a small Interfit Strobies softbox just below the camera. A third flash was located behind the subjects to help separate them from the background. I used a black fabric background, which worked out well. For the flashes I used Nikon SB-900's with RadioPopper PX receivers. The camera was an Nikon D700 with a 24-70mm 2.8 lens. The camera was triggered by a Pocket Wizard Plus II, which allowed the subjects to push the button on a cordless hand-held Pocket Wizard.

There was an extra SB-900 on top of the D700, with a RadioPopper PX transmitter. This allowed me to set all of the flashes right from the main flash on the camera. This can be helpful if you have to change out cameras, etc in the middle. Which I did. I started with my older D70 which worked fine except the remote for it was infrared and not radio so the subjects kept holding up the remote. Due to the sharp lighting in the bar, the IR remote did not work as well as the radio one.

All I had to do was swap in the D700 and slide the flash off the D70 onto the D700. I then set the D700 on 1600 ISO  1/60s  f/10 and we were in business. (Any tweaks to the lighting can be done from the flash on top of the camera and the RadioPoppers will transmit this information to the other flashes automatically, using the Nikon CLS system.)

The background was a Westcott collapsible background that was held up by two manfrotto 8 foot light stands and a Photoflex TELESCOPIC LITEDISC HOLDER - PHLDHT.  Tethered to the camera was a small MSI Wind netbook with Nikon Camera Control Pro (v2.7). I had used Camera Control Pro because it works with the D70. Lightroom 3.0, Capture One, or if you have a Mac, Sofortbild would work fine too. One thing that I like about Camera Control Pro is that if there is some communication loss on the camera, if you swap out a battery for instance, Camera Control Pro just picks up the camera and keeps on rocking. There is no need to go to any menus, or anything. The interface has no frills, so the people who use the booth have nothing to play with other than a filmstrip of pictures and the preview. I use Capture One for studio work because it has that great focus mask, but for this setup Camera Control Pro on a cheap netbook was the way to go.

Keep in mind that I wasn't standing by the booth, so there was no adult supervision on it all night long. (I do want to add that everything was taped down with gaffers tape and the tripod was anchored with a heavy weight.)

The laptop and the camera were on a Manfrotto DOUBLE HEAD SUPPORT (BLACK) (3153B) - MA131DDB   and Gitzo G065 MONITOR PLATFORM - GIG065. This is a great setup. I picked most of my stuff up at BHPhoto, which is by far the most amazing photo store on the planet! My softbox and lighting accessories were from Penn Camera. Keep in mind that while you can buy things online, it is often better to go the local camera store which may have better deals on the larger equipment due to shipping and I have found their advice very valuable.

The setup worked for 6 hours on 2700mAh AA Promaster batteries. The laptop was plugged into the wall. The new SB-900's are great. I have found that low batteries and recycle times are not as much of an issue. The auto overheat shutoff is great too. When you get a bunch of kids playing with the trigger the auto cool down is a great feature to save your flashes. (It takes a lot of blasts to get you there with this setup ;) )

People had a great time with the booth and that is a real understatement. There was a chalkboard to write messages to the bride and groom. (Whiteboards will reflect.)  You can imagine what type of photos got taken as the night went on. Potted plants became part of the scenery, with heads popping through "out of the jungle" into the frame. I highly recommend it!

This setup makes a great Wedding Photo Booth!
If you have any questions just send me an email.