The Tamron does have slightly better image stabilization. You can quickly check by zooming to 70mm and then zooming into 100% on live view video and try to hand hold the camera. Any camera shake and image stabilization is quite clear when you turn on and off image stabilization. The color rendition on the Tamron was always a bit flat and the sharpness never really got to that of the Nikon. Now you can see the difference in video immediately and on stills the newer Nikon blows the Tamron away.

My advice - dump the Tamron and the older Nikon 24-70 and get the new one. It is that much better. The old one is great in great light (or with flash), but the new one looks much better in any light and in low light there is no comparison for light gathering, light transmission and color rendition.

Have fun and I hope that you find this useful.

I will try to post more later, but I can't post a comparison video since I dumped both of the older lenses.

(And no making fun of the cat pic - it is good for seeing detail. This one was shot in lower light, but not completely dark.) 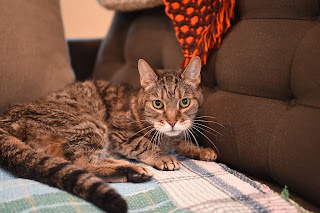