How to Shoot Kitchen Cabinets and Furniture

I had the opportunity to shoot a few photos for Harvey Miller, a Washington DC area Master Craftsman. Harvey started out restoring 17-19th Century furniture over 30 years ago and continues to do great work on refinishing kitchen cabinets as well.

Always eager to try something new, I took a drive up to Frederick, MD to shoot some of the kitchens he has refinished. 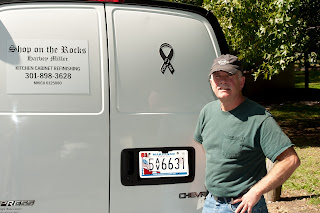 ﻿
The first thing I shot was an example of Harvey's restoration of this beat up cabinet door. The right side of the door shows the original condition and the left side is refinished. The picture was taken in the shade provided by Harvey's van (pictured above.) I laid out a piece of old black velvet curtain and set the piece on top of it. The main light came from a softbox set on the ground to the left of the piece. The second light was from the flash on top of the camera. The lens was a standard Nikon 70-200 f/2.8 VR II. 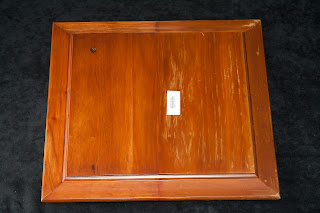 Alright - on to the kitchen. (This kitchen was refinished over a year before these pictures were taken so the cabinets show the wear and tear and smudges from a year of cooking, etc.)

The first thing we did when we got to the house was meet the owners and thank them for giving us the opportunity to come into their home and take some shots of their kitchen. We left all of the camera gear in the car at first. There is no need to bring in all of your tools, when only a few will get the job done. There is also no need to try to impress the homeowners by invading their home with piles of gear. After taking a look around we decided to use one umbrella with a Nikon SB900, one Bruce Dorn Softbox with eggcrate diffuser (Watch for sales on eggcrate diffusers. Full price they are very expensive. I got mine on sale for around $29 each.) and one flash on the camera. The lens was a Nikon 24 f/1.4 G. 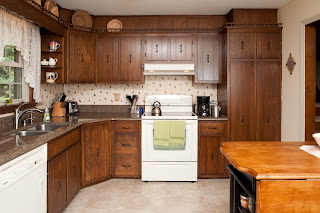 In this shot the umbrella was off to the right behind the camera and set 1 stop less than the main flash on the camera which was bounced off of the ceiling. The umbrella served to fill the room with diffuse light from below and behind similar to the clamshell lighting technique that is used in portraiture. Given more time it might have been better to set up a longer exposure and a tripod to allow for less light and help to subdue the large white highlight on the cabinet center from both the ceiling bounce and umbrella. 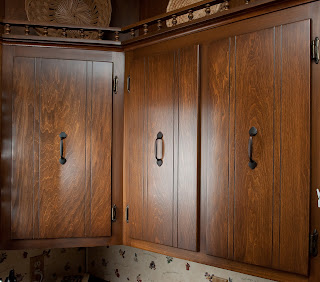 This shot was meant to put emphasis on how the stain brought out the wood pattern on the left door, while also showing the type of satin finish on doors as seen on the two right doors. This was done with the Bruce Dorn softbox with eggcrate diffuser. This setup can also make the light look as though it is coming through a window to the left of the cabinets as well as a second north facing window further to the left and behind the camera. Since this was not the layout of the actual kitchen the softbox makes a good substitute to give that same look. 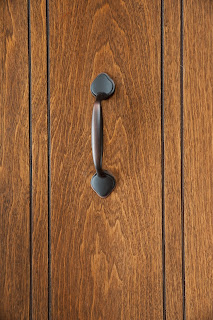 ﻿This final shot makes use of the softbox to the left of the camera facing across the surface of the cabinet to bring out the detail in the hardware and the clean finish along the grooves in the wood. The fill light was from the flash on top of the camera.

As always with these shots, I used the RadioPopper PX system. It works tremendously well, allowing me to use the full Nikon CLS system as intended, even when my flashes are not in line of sight. In this case I could have done this without the radio transmission and used the SB900's as intended, but I had the setup prepped with RadioPoppers in case I needed to move the flash outside and fire it through a window.

1) Watch the little details. Any smudges and out of place objects will draw the viewers eyes away from the intended subject detail.

2) Get the camera and lens as close to perfectly vertical as possible. This will help to avoid distortion. If you do get some distortion the lens correction filter in Photoshop can help you out.

3) Lighting, Lighting, Lighting - Shooting in kitchens is all about lighting. You need enough to light the room for the wide shot as well as lights for emphasis in the closer shots. This does not mean that the room needs to be blown away with light, just enough will do. Without the light, it is hard to bring out the detail of the finish or the wood grain on the cabinets.

4) Depth of Field. A smaller F stop around f/11 to f/16 will ensure that all of the objects are in sharp focus. While tight focus with a falloff is good for specific objects, it can be distracting when looking for detailed craftsmanship across the kitchen. Artistic views are good, but the emphasis here is on letting the viewer zoom in and look at the details that they want. The intention is to bring out those details, but not dictate exactly where they look. The viewer should be able to inspect the piece as though they were there up close and able to touch it with their own hands.

I always try to have twice the number of flashes that I need. When you shoot portable flashes and you try to squeeze all of the light out of them you can get (when trying to overpower ambient light or using high speed sync (HSS)) you will quickly either exceed your flashes ability to deliver enough light (HSS) or overheat the flashes. If you use two or three flashes in the place of one they can all be set on a lower power and will not overheat as quickly. Always have a spare master flash to place on the camera if you are using that as well for bounce lighting. Sometimes that means two flashes per umbrella and three umbrellas and others it is three flashes per umbrella and only two umbrellas. The Lastolite Triflash brackets work well.
Posted by Unknown at 7:24 AM